About This Site
This may be a good place to introduce yourself and your site or include some credits.
Search

All Star Tribute to the Beatles White Album 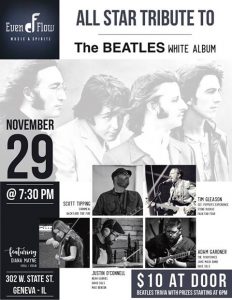 50 years ago in November 1968, the eponymous Beatles’ record known as The White Album was released. The controversial double LP has been hailed as both a masterpiece and the beginning of the end for the Beatles. Come decide for yourself as a collection of all star musicians, including Scott Tipping, Tim Gleason, Adam Gardner, Justin O’Connell, and Diana Mayne perform the album in its entirety.

Professor Moptop from “Breakfast with the Beatles” will host a special Beatles Trivia event with prizes prior to the performance. Trivia starts at 6:30. The performance starts at 7:30.

Beatles favorites such as “While My Guitar Gently Weeps”, “Blackbird”, “Helter Skelter”, “Revolution”, “Ob-La-Di”, and “Rocky Raccoon” will be performed in order track by track alongside cult favorites like “Happiness is a Warm Gun”, “Dear Prudence” and “Honey Pie” .